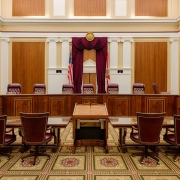 The Florida Supreme Court appeared skeptical about the constitutionality of a 2013 medical-malpractice law that critics argue could lead to violations of patient privacy rights.

Five justices asked critical questions about the law, which is part of years of battles between groups such as doctors and plaintiffs’ attorneys about the state’s malpractice system. The 1st District Court of Appeal upheld the law last year.

“Your medical information is one of the most private of what you possess as a citizen, what you talk to your doctor about, your treating doctors, and it could go far from just your medical condition,” Pariente said at another point in the hearing.

The challenge to the law was filed in 2013 in Escambia County. The plaintiff in the case, Emma Gayle Weaver, contemplated filing a medical-malpractice lawsuit against physician Stephen Myers but was concerned about the constitutionality of the ex-parte change, according to court documents. Weaver was the wife of the late Thomas E. Weaver, whose care was at issue in the malpractice allegations.

Erik Bartenhagen, an attorney representing Myers, told the Supreme Court that other states have similar laws and that ex parte communications are aimed at helping resolve malpractice cases.

“The purpose of it is to have a full and free exchange of all information relating to a claim prior to entering the courthouse doors in order to weed out frivolous cases and settle meritorious cases,” Bartenhagen said.

Robert Peck, an attorney representing Weaver, raised a series of constitutional objections to the law, including arguing that it violates privacy rights in the Florida Constitution. Also, he contended that the Legislature’s passage of the law violated the separation of powers because the Supreme Court has the constitutional authority to decide issues such as whether to allow ex parte communications.

The Supreme Court typically takes months to rule on cases. But Pariente was joined by Chief Justice Jorge Labarga and justices R. Fred Lewis, Peggy Quince and James E.C. Perry in asking critical questions about the law. The other justices, Charles Canady and Ricky Polston, sat quietly throughout the 45-minute hearing.

Lewis was particularly pointed in his questions of Bartenhagen, at one point referring to conversations allowed by the law as “clandestine.”

Bartenhagen said much of the patient information can be obtained through other types of evidence-gathering in malpractice cases, but the use of ex parte communications can make the information available earlier.

“I think the feeling is that this will lead to more open and free discussion and that therefore the value of the case will be determined earlier,” he said. “Right now (without ex parte communications), there’s no way for these frank and candid discussions between the defense and other treating physicians to happen until you take a formal deposition or you schedule a sworn statement with the plaintiff there.”

But Lewis indicated he doesn’t think such reasoning means the law is constitutional. He also refuted assertions by Bartenhagen that other protections are in place to prevent the disclosure of private patient information that is not relevant to the malpractice cases.

“There’s no one there (in ex parte discussions) to say, ‘Hey, that’s not relevant, don’t go there,’ ” Lewis said. “How can you protect against it if nobody knows it’s going on?”