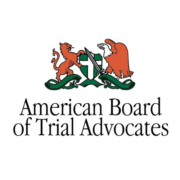 Chris Schulte has received the 2020 Joseph P. Milton Professionalism and Civility Award from the Florida Chapters of the American Board of Trial Advocates. FLABOTA established the award to honor one of its former presidents, Joseph P. Milton, who became known for his exemplary service to FLABOTA and in his community and for his high standards of professionalism, civility and ethics. Nominated by the Tampa Bay Chapter, Chris was recognized by his colleagues throughout the state for conducting himself with professionalism, civility and the highest degree of ethics; exhibiting integrity, honor, courtesy and a sense of fair play; educating the public about the civil justice system and the rule of law; contributing his skill, knowledge, and efforts to enhance and educate the legal profession; and demonstrating a commitment to serve others.

ABOTA is unique in that its membership is divided evenly between plaintiff and defense civil trial lawyers. Membership in ABOTA is by invitation only. Members are selected by their peers and exemplify the highest professional and ethical conduct.